As a family, we love games – especially games we can all play (aged 5+).  Board games, card games, computer games, roleplaying games…  So here’s a quick run-down of the games we played Christmas 2015.  Some we got as presents, some we already had, some we pretty much made up on the spot!

An old family favourite, and an excellent way to kill 10 minutes while you’re waiting for something else.  Even my youngest loves dominoes – and he’s pretty good at it as well.  For the older players, you’ve the strategy of working out how many 5’s have been played and if you can mess up the entire game by playing that 5:1 this way around.  For the youngers, you’re pattern-matching.  Great fun. And there’s nothing like the look of triumph on your youngest’s face as he slams down that last tile in victory.

A great way to teach kids some basic maths – cards add up to more than 21? You’re bust, pay up.  Probability – what’s the odds of drawing the card you need? Seriously? A 10?  Bust.  Pay up.  Strategy – do you stick on 16, hope the bank goes bust? And, ultimately, that the Bank always wins.

We play with a pile of pasta pieces for each player.  It’s always entertaining to see individuals’ piles get smaller and smaller, while the pasta mountain in front of the banker gets bigger and bigger.

Lots of little pieces, a map of central London, beginner and advanced games, and the ability to victimise one of your family members!  What could possibly go wrong?

This was a game we received this Christmas and broke out to play on Boxing Day.  Put simply, one player takes the role of “Mister X” and has to evade capture by the other players, moving around the map of London in a number of different ways – bus and taxi in the beginner game, tube and ferry are added in the advanced game.  The other players take the role of detectives hunting him down.  Some moves Mister X makes are made invisible to the pursuing detectives, recorded on a little tracker so that the other players can see they’re not making things up.  In the basic game, if the detectives capture Mister X before turn 12, they’ve won.  If Mister X evades them, he’s won.  The furthest any of us made it as a fugitive was turn 11.

The advanced game is a little more complex.  Detectives only have a limited budget of transport tickets to spend, starting points are randomised across the map, Mister X makes most of his moves invisible, only popping up from time to time to blow raspberries at his pursuers, hopefully from a comfortable distance away across the board.  Mister X also has to evade capture for a lot longer – 20-odd turns.  Again, 11 or 12 is about the most any of us have managed.

The detectives work as a team, moving after Mister X has made his move.

I’d definitely recommend this for players of 8 and over.  The game has a maximum of 5 players – 4 hunters and 1 Mister X.  The feeling of persecution you feel when being hunted is really rather unpleasant, but you do find yourself thinking about your strategy for next time long after you’ve finished playing. 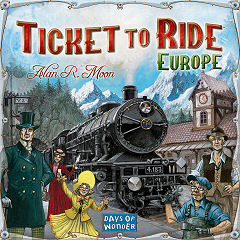 Ticket to Ride is one of the big hitters in the boardgame market.  I’d rank it up there with Settlers of Catan and Carcassonne.  We bought 2 copies before Christmas, realised that one of the people we were going to give it to already had it, subbed for a different game and decided to keep it ourselves.

Up to 5 players work to build train routes across Europe to match the tickets they’ve got in their hands.  Tunnels and ferries act to complicate things a little (or they would if we’d played the full tunnel rules).  It can get frustrating at times, when someone else claims a route between 2 cities you need to complete your ticket, but there are usually multiple ways to do any given journey.  There’s a lot of strategy discussed across the internet, but we’re only just getting going.

This one is a bit more taxing for the younger players – I’d say our 8 and 10 year olds struggled to sit through the full length of the game – but a lot of fun.  Like Catan and Carcassonne, lots of expansions are available once you’ve got the base game down pat – map routes for the UK, darkest Africa, and so on, all with their own little tweaks to the main rules.

A tabletop roleplaying game.  Largely made up as we went along, using the simple(ish) Fate Accelerated system.  The FAE book doesn’t contain any rules for playing in a particular setting, the Force, droid abilities, and so on, were all made up as we needed them.

Basic premise of the game was that while the battle of Endor was ongoing, another group of Rebel agents were to infiltrate the Imperial shipyards on the ice world of Praxis 7, retrieve the plans for a new secret weapon (the nature of which was never revealed) and then destroy the base on the way out.  Through some clever Jedi mind tricks (and some spectacularly gullible Stormtroopers) the party blagged their way in to the base under the pretext of a surprise Health and Safety inspection, which the party’s R2 unit retroactively added to the base commander’s diary while searching the computer network for the secret weapon plans).  Much fun ensued as it turned out the base commander feared the HSE far more than the Emperor himself.

We played this a few hours after watching The Force Awakens, more on which in a future post.  It was the first time I’ve run FATE as a system, I’ll definitely be going back to it.

The only Playstation gaming I got done at all this Christmas was picking off the odd mission in Destiny.  I have a bit of a love-hate relationship with this game.

I love the graphics, the weaponry, the architecture on Mars and Venus, the varieties of enemies you face.  I love the fact that when you’re killed, the game tells you what got you.

I hate that it’s single-player on the PS4 and that to do any sort of multiplayer you need to shell out more for a PSN subscription.  Okay, so they bundle a month free in with the game but that’s not the point.  Borderlands gives you 2 players on one PS3, 4 players over LAN or WAN.  And there’s all this stuff you can collect – helium coils, spinmetal, spirit blooms, none of which I’ve found any use whatsoever for!  You can’t trade with other players – hell, you can’t actually communicate with other players unless you’re friends with them already.  Judging by what I’ve read online, many other players feel the same way.

I hate that I’ve nearly completed the bulk of the game I can play without a PSN subscription in what feels like a very short amount of time.  End-to-end, probably a couple of days of gameplay.  That’s not great value.  I hate that every time I come back to the game it’s forgotten how much ammo I had for each of the 3 gun categories and set me back to no heavy weapons ammo.

I don’t understand the loot system.  Unlike Borderlands, where every container can be opened and ammo or cash collected, loot drops in Destiny seem seriously infrequent.  I’ve only found a handful of chests in the levels I’ve explored, and they’ve contained this useless crud that only appears to exist to clog up your inventory.  Apparently there are uses for them, but I’ve not discovered them yet.

I hate the fact that, having presented itself as a fairly straightforward first person shooter, the game diverges into a precision-jump platformer in a couple of the missions I’m currently stuck on.  I’ve no idea what the main storyline is, where I am along it.

Would I buy Destiny (I got it bundled with my PS4)?  No, probably not.  Not sure what the replay value is – the races and character classes don’t appear to make a great deal of difference to the gameplay, so it’s not like seeing how the Siren handles compared to the Gunzerker or the Mechromancer.

Oh, and the PS4 has other shortcomings – no Blinkbox movies, no All4 player.  So realistically, when the other PS3 dies, I’ll replace it like for like.

So that’s that!  A decent handful of games played this Christmas, we’ll continue with them as the year goes on.  What did you play?

One response to “A Very Gaming Christmas”