Inspired by today’s post at Mummu Says.net about the books they’re reading at the moment, I thought I’d share what my army of 5 are reading…

We’ve quite a wide range of readers, both in age and ability, in this house with kids from 3 to 13. Sometimes their tastes intersect, sometimes they’re wildly different. Sometimes we all sit down together to read a story, like “The Night Before Christmas” on Christmas Eve. I love reading that one. Thing2 (Boy, 11) has taken to reading to us in the car because (as he rightly points out) “you can’t read, dad, you’re driving.” Observant boy.

Thing 1, Girl, 13 – Harry Potter and the Order of the Phoenix

This is a repeat read. And, to be fair, it’s one of the quicker HP books to read given that it contains less plot than the 1st one. Just as ITV’s been showing Harry Potter movies with as much frequency as they used to James Bond ones, she’s been reading and re-reading them since we first read her “Harry Potter and the Philosopher’s Stone” years ago. 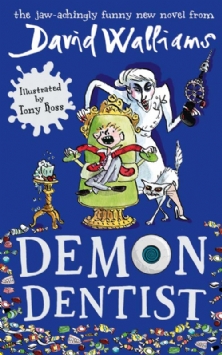 If there’s one thing you can count on at the moment, it’s David Walliams releasing a book late on in the year. If Thing 2’s lucky, it’ll be out late in September in time for his birthday. This year, it was out a week or 2 later and came in handy as a Christmas present.

David Walliams writes brilliantly for kids of this age. And older – I’m enjoying Demon Dentist as well! Before David Walliams it was Andy Stanton and his Mr Gum books. When I was his age I was on “The Chronicles of Narnia” and “Professor Branestawm” (which, to be fair, is very Mr Gum in it’s surreal silliness).

I’ve got “Raising Steam” in my to-read pile. I’ve read every other Terry Pratchett book, got ’em on the shelves next to me now. Thing 1’s read “Hat Full of Sky” and “Wee Free Men“. We’ll get to “Where’s My Cow?” in a minute. He’s got all age ranges covered and the world of fantasy writing will be a poorer place when he’s gone. I just hope that (1) someone steps up and continues writing Discworld fiction after that and (2) it’s not Eoin Colfer, not after the 6th book in the Hitch-Hiker’s Guide trilogy debacle. I couldn’t even start that, let alone finish it. Like “Where’s My Cow?” before it, “World of Poo” started off in one of the “grown-up” Discworld books and developed a life of it’s own. A little boy sets off to create a museum of every kind of poo he can find in the city – and in Ankh-Morpork that’s a LOT of poo. It manages to be both entertaining and educational in equal measures.

Before that, for bedtime stories, we were on the first 3 “Rise of the Guardians” books and what a blast they were! Totally different from the film and yet such an amazing story! A shame I’m not hearing good stuff about the 4th one in the series.

Things 4 and 5, ages 5 and 3 respectively. Assorted

Wow! I think these 2 have as many books as I do between them. There’s a Mick Inkpen treasury where the introduction says something like “an author loves to find his books well-read and dog-eared. That’s easier with children’s books.” This one, like The Gruffalo, The Smartest Giant in Town and so many others are patched and mended, taped up and rebuilt from the ground up. Very occasionally we’ll have to concede defeat and buy a new copy. The Fish that Could Wish. Little Rabbit Foo-Foo. Custard the Dragon. Superworm. The Octonauts and the Frown Fish. You Choose. Spider School. So many great books and they’re all such fun to read aloud.

I think that’s the key to it all. A good book should stand up to being read aloud. We’ve read Chris Brookmyre, Harry Potter and Harry Dresden books during long car journeys. My wife and I read to each other every night (Currently Ben Hatch’s “The P45 Diaries“, next Ben Aaronovich’s “Rivers of London“). And I love reading to my kids. Any dad who doesn’t is missing a trick.

So… What’s on your reading list? Your kids’ reading lists? Recommendations? Books to avoid?