I have just become the proud owner of, amongst other things, a table.  It’s about 180cm x 100cm, average height, medium-dark stained wood.  It extends by another 80cm or so thanks to two panels that store underneath.  It’s not that special to the average person, but it was my parents’ dining table throughout my life.  Until it was replaced by the thick oak one they have now.  Of recent years, it’s not been used, it’s just sat in storage.  So last weekend, my eldest son and I went to collect it.

I outlined the journey we’d be taking last week (Getting there is half the fun).  And it all went according to plan.  The car was fixed by the wonderful folks of Arnold Clarke Renault in Dundee.  My son has discovered a taste for black coffee (and latte but not cappuccino, strangely).  He’s also demonstrated excellent skills at reading road signs, keeping us on the right path and estimating the journey time from point A to B.  His biggest contribution to the trip was the choice of music.

Normally, before a long journey, we’ll rake through the CDs and mp3s and produce a few discs to keep us all entertained.  Some music for everyone in the car.  But there was only the two of us and we never got around to making the discs.

“Let’s listen to some stories,” he suggested.  So we went to the library and got a couple of books on CD.  “Jeremy Brown, Secret Agent” was one, “Harry Potter and the Goblet of Fire” the other.  Yes, it’s a long journey (but not that long, as it turned out). 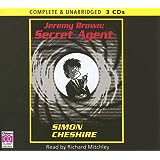 When we started off from Dundee, Jeremy Brown kicked in and I remembered why I used to listen to audiobooks on long drives before.  Your mind gets caught up in the story.  Each disc gives you about an hour in this zone and the miles do just fly by, carried along by the story.  We can heartily recommend Jeremy Brown for anyone with kids aged between about 6 and 10 – and any adults who just happen to be listening.  I know we spent a time crawling through the endless roadworks between Stirling and Glasgow, just because I know the works are happening and I remember seeing them again on the way north.  But I don’t remember them being a chore.

As the kids grow older, I can see this happening more often.  We’ll replace the music discs with episodes of Black﻿adder, Elvenquest, The Hitch-Hiker’s Guide to the Galaxy and other stories.  We’ll be accompanied by the dulcet tones of Stephen Fry reading the complete Harry Potter (we only made it to disc 5 this time).

One last thing.  Our final stop heading north was the Cairn O’Mohr winery.  Since we moved to Shetland and first saw their road sign (“How can you have a winery round here?  There aren’t any grapes!”  “I don’t know, let’s find out”)  we’ve stopped there whenever we’ve had a chance.  They’ve always had a fantastic selection of their own fruit wines – watch out for the specials, Berry Up and Accidental Rhubarb have both been top quality drinkies – and local unusual beers for sale.  They’ve also got some wonderful carved wooden heads.  Since we first went there, they’ve added something new pretty much every time we’ve been.  This time was the first time we’d had a chance to sample the delights of “Fort Bob”, their cafe.

This is the review my son gave the place:

“Can we go there again, dad?  That latte was brilliant.  And I’m having a chicken and chutney sandwich just like that one when we get home.”

Word of warning, though, don’t go there if you’re on a diet.  The cakes are top-notch.  I had a blue cheese and cherry tipsy scone.  Most excellent, even if the first thought is “blue cheese and cherry?  Really?”  Fort Bob is well worth a detour to get to, just as is the organic cafe at the Pillars of Hercules further south in the Kingdom of Fife (go when the pick-your-own fruit is under way.  Trust me.)

So.  The next time you get in the car, give the music a break for a change.  Stick on a story and see how far it takes you.  And, out of interest, what do you listen to in the car?  That’s what the comments here are for!