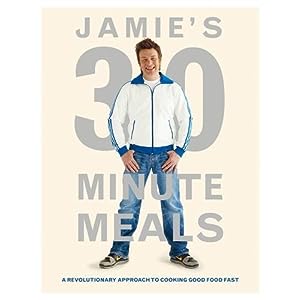 For Christmas, my wife received Jamie Oliver’s book “30 Minute Meals” as a Secret Santa present.  We don’t know exactly who from, but it was an inspired choice.  Since then we’ve been working through those recipes at a rate of 1 a week, usually on a Sunday night.  Do they live up to their claims?  Can you really cook a 2 course meal in 30 minutes?  Yes and sort of.

As he says in his introduction, you have to be in the right frame of mind.  The “30 Minute Meal” frame of mind.  You have to set aside distractions, ignore the mountains of rubbish and washing up that build up around you, and you’ve definitely got to own a Magimix.

When you watch the great man at work in the TV programme that accompanies the book (or is it the other way around?) you can see he knows these recipes inside and out.  He could do any one of these meals given the ingredients and the name of the recipe.  My wife spends a good length of time reading and re-reading the recipe so that she only needs the book for reference (for it is usually her cooking whilst I field the kids and generally sous-chef for her on a Sunday).  If you’ve got to go back to the book (and back and back again) you’ll never do it in 30 minutes, as I found out when it was my turn to give one of these a go!

Be warned, cooking these meals will increase the cost of your weekly shop.

After a while you do build up a stock of some of the more common ingredients, and you start thinking about investing in shares in an olive oil company because he uses a lot of it!  Lugs and lugs of it, to use his own terminology.  But there’s usually 1 thing we have trouble getting hold of here on our lonely rock.  He’s got this thing about chicory in salads and I cannot find that for the life of me!  We’ve substituted baby lettuce, Chinese leaves, anything that seemed likely to make a good salad.  And, trust me, the salads in this book are extremely good indeed.  Frozen mango chunks was the last ingredient we couldn’t find.  Neither of the supermarkets up here stocked it, so we subbed in some frozen berries and the ice cream came out just fine.

Right.  This is where the story really starts.  You’ve read through the recipe, you’ve done the preparations he’s suggested in step 1 (fitting the right blade to the Magimix, boiling the kettle, getting a pan on to boil, the usual stuff).  You’re all ready to go.  Now the kids can really help out by either (a) keeping the kitchen tidied or (b) keeping each other occupied in a non-painful way in another room.  Anyone who can stay out of the way of the knifes can help.

Although Jamie Oliver quite happily handles everything on his own on TV, I’m pretty certain there’s a team of underlings bustling around during the cut scenes, the commercial breaks, all helping with the tidying up.  So that’s job 1 you can give to a helper.  Have an area set aside for stuff that’s finished with and get someone monitoring that.  As soon as a bowl, a dish, a wrapper enters that area, get it in the right place.  Load the dishwasher, get it washed up, chuck it in the bin, whatever’s appropriate.  Job 2 is getting the table set and ready.  Having read through the recipe you’ll know what you’re needing in terms of eating irons, so dispatch a helper to get those lined up.  If you can get plates onto the table as well, go for it.  There’s only a few of his meals that serve up directly into plates/bowls.

Is 30 minutes long enough?  More or less, yes.  If you’re prepared, if you’ve got at least 1 helper, if no-one phones and wants to talk about last night’s Doctor Who.  Will your kitchen be a mess at the end of it?  Yep.  Unless you’ve got some extremely good helpers!  We usually manage to keep on top of most of the mess, working directly into the dishwasher.  Are the meals good?  Definitely.  His salads are excellent, his deserts have been requested again and again.  The fact that the entire process is wrapped up in 30 minutes means there’s no lengthy preparation, no “and marinade this for 6 hours prior to cooking”, nothing that complicated.  Do the kids eat them?  Yes.  Yes, yes, yes.  All 5 kids have returned a positive verdict on the meals we’ve cooked.  Where there’s been something they didn’t like, it was one part of the overall dish and nothing to be concerned about.  What’s going to happen when we’ve done the lot?  Ah, there’s an app for that – I downloaded his 20 Minute Meals app to my phone the other day.  It’s rather good!