Application of the Week – World of Goo (#gaming)

I’m not much of a gamer anymore.  I don’t have the time (5 kids will do that to you, especially when the eldest is getting into games and you’re getting your arse handed to you on a plate when you take her on).  And I’ve never been that much of a PC gamer, either.  I’ve got a PlayStation for games and there’s not a lot that gets ported to Linux anyway.

Every once in a while a game comes along that I can’t not play.  The first one I remember was Lemmings, sitting in my uncle’s house in Wales playing the damn game for about 14 hours straight.  Hey, at least I was quiet and it kept a teenager occupied.  In the last few years, though, gaming’s been getting more complicated and less fun.  That changed with World of Goo.

I obtained World of Goo through the Humble Bundle over a year ago.  I was actually only after the horror game but it’s a bundle, you get the lot.  Then a few weeks ago a friend of mine on Twitter complained about being stuck on a certain level and I remembered!  “Hey, I’ve got that game.  I’ll give it a look.”  This was after I’d written my rant about giving up on games and walking away, saving your stress and sanity.

An hour and several levels later I was completely hooked.

The premise is a very simple one.   You have some balls of goo at the start of the level and an exit pipe to get them to.  You can build things with your goo – towers, bridges, stuff like that.  Different types of goo have different properties – some attach to each other permanently, others can be removed and reattached, some float, some are flammable…  Sound familiar?  Blockers, diggers, acrobats?  The game gives a nod to Lemmings in other ways – you have to save a minimum number of goo balls on each level.  A sample level might look like this: 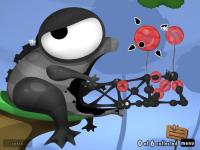 Off to the right is the exit pipe.  You can’t see the spikes at the top and bottom of the screen that will pop your precious goo balls.  Structures you build have a realistic internal physics model – build out and it will start to droop according to it’s weight, add balloons to offset the weight and the whole structure will start to oscillate like the Millennium Bridge in London!  Towers sway in the breeze, you have to compensate for gravity…  Aaargh!  It’s most wonderfully frustrating. Levels can be deceptively simple, the game starts off with some quite pedestrian levels to get you used to manipulating your goo.  Each level also has a challenge – the OCD (Obsessive Completion Distinction) challenge.  This gives you a little flag next to the levels you’ve completed on the map screen.  Sometimes it will be to save a certain number of goo balls, which can seem impossible until you realise there’s a trick to completing the level and you can, essentially, cheat; sometimes it’s to complete within a certain time or with a certain number of moves.  Pressing Esc whilst playing a level lets you take a look at the OCD challenge for that level.  I’ve managed it on 3 levels so far.

There are some excellent sites out there to help you when you get completely stuck.  YouTube, of course, has video walkthroughs for every single level.  GooFans.com is a superb fan site with help, walkthroughs and (for when you’ve completed the game) more levels.

The graphics and soundtrack to the game are top notch.

I’ve not played a game that’s hooked me as much as this for over a decade.  You can get it on PC, Linux, Mac and the Wii.  So go.  They say that misery loves company, so when you get to the Epilogue you’ll be joining me.  I’m stuck.   I know what I’ve got to do, it’s just those spinning death wheels that keep getting in the way!